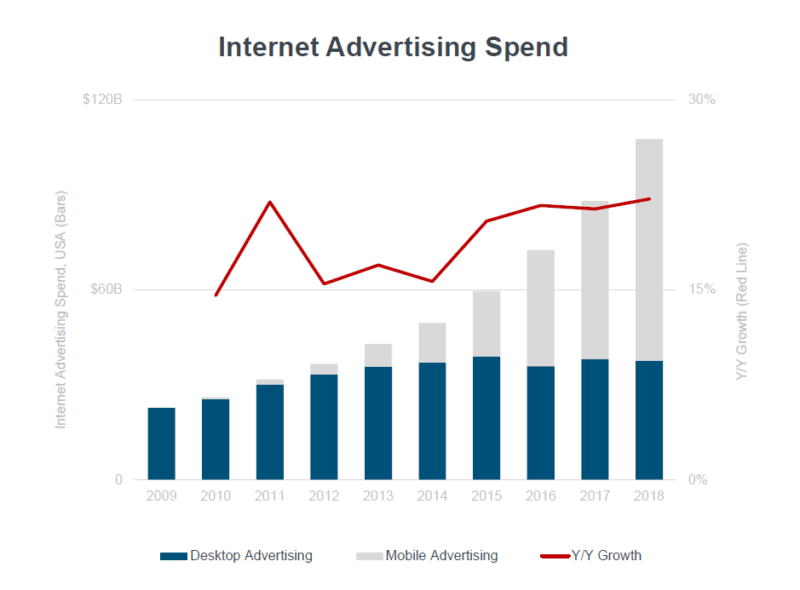 YouTube is growing in popularity since more and more people tend to want to consume their information visually. Vlogging has become very popular, even YouTube famous celebrities are well known. The increase in video content has given way to a new form of social media video sharing. Instagram and snapchat using the term "stories" as a way to portray your videos online to share with your friends.

Instagram has seen increases in their users by 19%. Over an eighth of the 7.7 billion people on the planet use Instagram. So maybe putting your business on Instagram might be a good idea. More than 500 million of those users log in to the platform EVERY DAY. The good news is that 95% of Instagram users also use YouTube! This is why we have seen that rise in the amount of ad spend on social media.

As we can see on this chart, thanks to Mary Meeker Internet Reports, there's been an increase in mobile ad spend year after year.

We can also accredit the amount of money spent on mobile advertising on the fact that mobile phone users worldwide has increased. According to statista, “the number of mobile phone users is forecast to reach 4.9 billion.” Smartphones are basically tiny computers that fit into the palms of our hands. It’s no wonder that more and more people are willing to use social media more often.

What does this mean for you and your business?

The number of people finding their way online keeps increasing. With social media being one of the main reasons people go online. Putting some of your marketing efforts towards this could prove to be beneficial. There’s a whole lot of global revenue for products and services on social media. Learn about how to maximize your ROI with social media ads through Red Shark Digital today!