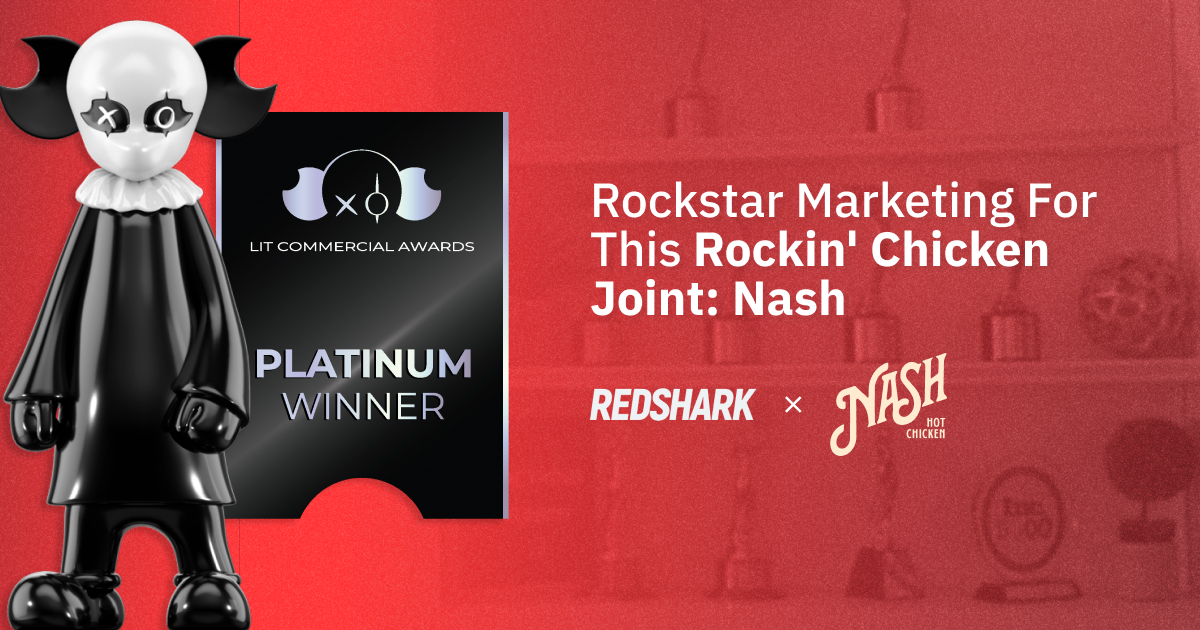 Greenville, North Carolina: The LIT Commercial Awards, an international platform that encompasses commercial excellence from local to international horizons, is thrilled to reveal the 2022 edition winners alongside the International Awards Associate (IAA). Recognizing and celebrating the trailblazers who continue to step up their productions, the LIT Commercial Awards program serves as an innovative medium for creative and marketing related parties to illustrate their media visionaries towards internal and external audiences.

This year, Red Shark Digital is bringing home the LIT Platinum award in the awards program for social media. The winning production that led to their decisive victory was created by RSD for Nash, local hot chicken restaurant in Greenville NC. “Rockstar Marketing For This Rockin’ Chicken Joint: Nash” details out the identity, design and creation of Nash Hot Chicken, and their social media presence that has aided in the restaurant’s success as a local establishment.

“As a creative agency, we are thrilled to have partnered with Nash on their brand activation marketing campaign,” said Spencer Bunting, COO of Red Shark Digital. “Our team had the opportunity of starting with Nash at the ideation stage and see it through to a brand-launch campaign after creating a brand identity that truly captured the vision of the brand’s owners,” said Bunting. “We are honored to have won an award for this campaign and are grateful for the opportunity to have partnered with such a unique and dynamic client.”

With Nash being the first of its kind in Greenville North Carolina, it was imperative for Red Shark Digital to create the restaurant’s identity and branding that would allow Nash to stand out among the other local restaurants in the area through their online presence. RSD conceptualized Nash the Chicken, the original mascot that is featured as the face of the establishment.

“The community has embraced us and that’s the most rewarding part of all. We didn’t have a blueprint or guidebook. We had a feeling and a vibe we wanted to capture: to deliver not only great-tasting food but a fun experience as well,” said Ryan Griffin, owner-operator of Nash. “We still have so much more to offer as we grow and learn. We can’t wait to see what the future brings for Nash,” said Griffin.

Organized under IAA, the LIT Commercial Awards welcome all enthusiastic production teams located universally for all in the production industry, whilst celebrating the innovative accomplishments of top-notch crew members that are the best in their respective fields.

“The alterations of the industry are truly unpredictable, but there is definitely a huge dependence on the trends of commercial productions, which we are currently exploring perceptively,” claimed Thomas Brandt, the spokesperson of IAA. “At the LIT Commercial Awards, all these remarkable entries are validations that we are right on the mission to deliver extraordinary presentations to the world.”

As IAA continues to strengthen the benchmarks of the production industry, neutrality in the jury panel is equally crucial. Under strict qualifications, the judges consist mainly of experts and professionals with unparalleled experience in their operations. Through their unique eye for excellency, the juries deliver their evaluations based on the utmost standards of the industry, searching for creative teams that will make a name for themselves.

To uphold the professional standards of the ever-growing commercial industry, the LIT Commercial Awards would like to commemorate all respected members of the grand jury panel for their unprecedented expertise and contributions not only towards the award itself, but the community as a whole. Some of these resplendent names are: Martin Bihl (United States), Diane Schulz (Germany), Fatima Ansari (Pakistan), Maria Afroditi Patsi (Greece), Samira Rafi (Morocco), Joaquin Lynch Garay (United States), Brendan Amoruso (United States), Birge Linke (Singapore), Min Lu (United States), Sam De Win (Belgium), and many others.

“We are one step closer to the realization of compelling stories from the perspectives of global brands, especially with the unfathomable qualities of this years’ submissions.” said Thomas. “It is truly a sight to behold, and I foresee a major leap of standards within international commercial videos and television productions going into 2023.”