Native Advertising and the Consumer Journey 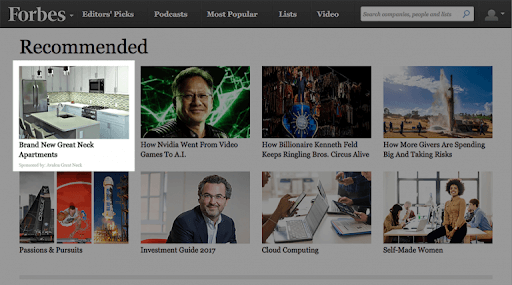 The fact is; these customers do know what native advertising is, if not the very definition. It is present in virtually every online touchpoint an individual user accesses every day whether it’s scrolling through a social media feed, or perusing through an article.

Here, we’ll define what native advertising is, and the best ways to leverage it for brand awareness, greater sales, and lead acquisition.

What is Native Advertising?

Native advertising is sponsored content that is embedded within a website or application, blending with the non-paid content on the page. It is possible that it may have very explicit marketing language attached to it, but more often than not, it is casually fit into the page as just another piece of interesting collateral that will entice a click or a share.

Much of social media advertising falls within the realm of native.

A promoted tweet is one example. It looks just like any other tweet, with the exception of the promoted icon in the bottom left corner. If it is content that is compelling to a wide audience and not too forward in trying to sell, it is more likely to be shared. The latest figures show that Twitter has over 321 million monthly users that a business could target.

Other social media platforms are very similar. Those social ads and promoted posts are all versions of native advertising.

Facebook -- the ultimate behemoth in social advertising has over 2.23 billion active monthly users that advertisers target.

For the professional crowd, Linkedin has over 250 million monthly active users.

The most common form of native advertising is called “in-feed.” These ads are typically seen embedded within a website’s content stream and are very common in news-aggregation sites. They look just like other featured content, except they usually have a discrete marker as an advertisement.

This form of native advertising has proven an effective delivery method for branded content that doesn’t interfere with the user experience, and is more likely to drive higher engagement. How much higher? According to Sharethrough & IPG Media Lab, not only are native ads looked at 52% more often than banner ads, but they also give a higher lift in brand affinity and purchase intent by 9% and 18% respectively.

According to StackAdapt, programmatic in-feed native ads yield click-through-rates up to 10x higher than banner ads.

There are other forms of native advertising that are becoming more common as well. This includes “advertorials,” or an article written by a sponsored provider.

How Do I Use Native Advertising Effectively?

While it may seem advantageous to bring in new customers by alluring them with relevant content, some advertisers have found the sweet spot is actually a little farther down the funnel. When you’ve already brought in a lead and want to close the deal -- that’s when native advertising has proven to be most effective. It’s taking a known user who has already seen your display ads, searched for you on Google, visited your website and maybe even filled out a form and helping them move farther down the funnel.

We’ve actually taken this method, and an inverse version of this method and found success.

You can start with display ads coupled with programmatic buying, where you have the ability to hone in on a target audience based on their behavior, region, or even a specific address visited using geofencing technology. This will create brand awareness where you will have the opportunity to retarget potential customers. This will include members of the audience who engaged with the ads using native video or other content to drive a conversion.

Conversely, we have also used native advertising to draw in an audience with relevant content and retargeted engaged users with display ads to bring them back to the site. Using each scenario, we have had success with several of our customers.

How Can Red Shark Help?

The best tactic to use will be dependent on your business. You may even want to try multiple iterations to see which tactic performs best. The most effective marketing comes when you test, analyze, re-test, and repeat until you find success.

To learn more about native advertising for your business in social or programmatic advertising, contact us to see how we can help.