Get Some Dev Cred 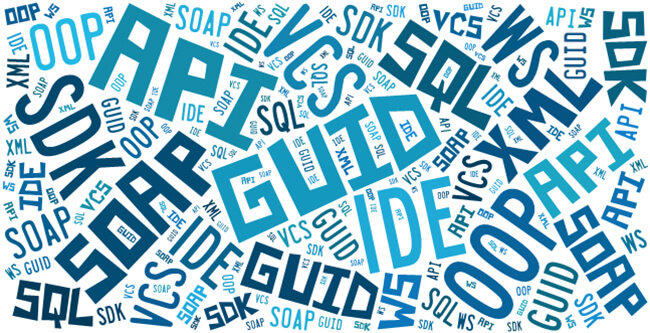 If you've ever peered into the world of development, you've no doubt been inundated with acronyms and abbreviations. But in our defense, it's a lot easier to say "LAMP" than it is to say "Linux, Apache, MySQL, PHP/Python/Perl", so try not to hate on us too much. I'll do my part to make up for the confusion and explain some of the more common ones, and in even some history. Let's get started!

Let's start with my first love, HTML. It stands for "HyperText Markup Language", and you see it every time you go to a web page. Okay, so you don't actually see the HTML, but you see what it does. It gives your page structure. These are paragraphs, this thing's a header, all of these other things go in this box called a "div" (short for division), and so on. It helps the browser know what things are. If you want to see an example of HTML, just right click the screen and click "Inspect Element". Now you're one (small) step closer to being a hardcore 80's hacker.

Next up, CSS, or "Cascading StyleSheets". We're talked about this (and HTML, for that matter) in another blog, so I'll be brief. It basically gives websites that wonderful (or in some cases NOT so wonderful) look.

Javascript is sometimes abbreviated as "JS". Nothing more to say about that. Moving on.

PHP! This one is my current favorite, mostly because it's what I use all day, every day. PHP was designed way back in the mid 90's and originally stood for "Personal Home Page". This was because the language was built to help people have a dynamic web page. But nowadays, it's what we call a "recursive acronym" and stands for "PHP: Hypertext Preprocessor." That's right, the first "P" in "PHP" stands for "PHP". I feel like I'm saying "PHP" a lot...

Next on the menu is SQL. There's a lot of different 'versions' of it, but they are all part of the "Structured Query Language". It's how we interact with a database to retrieve data, edit it, add new data, so on. Also, if you ever hear someone say "Sequel" when they're talking about programming, it's the same thing. We WOULD do the same thing with "PHP", but "ffffp" just sounds ridiculous.

Okay, now for one that isn't a programming language. Probably the biggest in this category, especially these days, is API. It stands for "Application Programming Interface", and it's a somewhat vague definition. Basically, it's a way to interact with a program without having to actually be INSIDE the program.

Well hopefully that'll help you sound a little more knowledgeable about the world of development. Now go show off to your friends! (the non-developer ones)